TREB’s July Numbers Are Out – And It’s Almost What You’d Expect.

As 2018 progresses, we in the industry (and our clients) are scouring TREB’s monthly numbers release to see what can be read in the housing tea leaves. 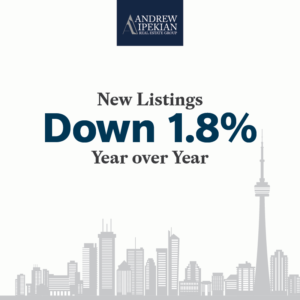 In terms of prognostication, there was nothing that TREB put out yesterday in the overall 416 numbers that are going to make us look twice, as the realities of summer realty in Toronto kick in. That is to say, in the detached/townhome segment, listings are down, Days on Market (DoM) is up and the dearth of supply is the only thing supporting prices (which were up slightly over a terrible 2017). On the condo side, the split market seems to be still in full force with prices up and good product selling quickly, especially near the Waterfront.

In the 905, the extra supply of new builds combined with the annual migration to Muskoka/Haliburton (or maybe just dealing with kids around the house ALL DAY) has kept prices down and the pace pretty sleepy.

But a bit of digging into the depths of the 27 pages of data can reveal a couple interesting insights that may help guide us through until after Labour Day when the market typically takes off on steroids.

2. In detached homes, a look at the correlation between sale price/list price and DoM reveals, again a disparity across the city, but the opposite to the condo market:

So, in short, while it’s tough to generalize about an entire market from a one-month snippet of data, I know I’ll be having coffee with my clients who are thinking about being active in the market the rest of this summer and telling them: 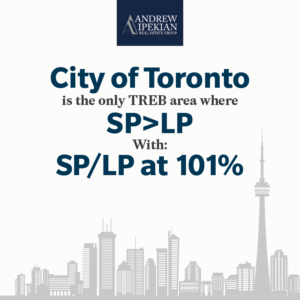 To see the original TREB data for July 2018 click here

Andrew Ipekian is principal Broker of The Andrew Ipekian Real Estate Group. Keller Williams Referred Urban Realty. He can be reached at 416-572-1016. Not intended to solicit clients already under contract.

Want to learn more about Investment Real Estate opportunities in Toronto? Sign up for the Ipekian Investors Group Here